I have not one, but two new style Name Banners to show you tonight.

Girls one up first! I have been wanting to make one like this for a while and had the ideal opportunity when I got a text from a friend asking if I could make a banner for a new baby called Mya, and I could use whatever colours I felt worked. I am typing this like it was a challenge I relished — in reality being told to use any colours and a butterfly design that you haven’t tested out yet is a little scary, especially considering the little knock to my confidence I had a few weeks ago.

But, I managed it. Eventually. After much un-picking, re-cutting and abandoning half sewn still in the sewing machine because it wasn’t the same as what was in my head — I finally got it finished yesterday and felt sort of happy with it.

So — here you go (opening myself up to the nastiness of a few weeks ago is a little scary I have to admit):

So, in colours of my choice, the butterfly banner. Again, gulp! 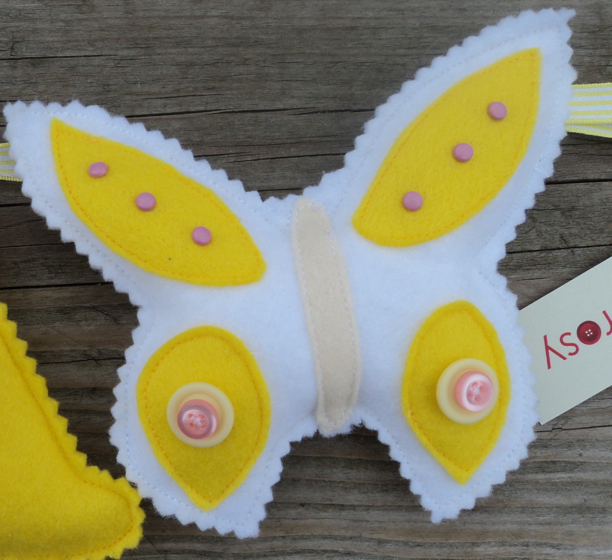 Close up of the butterfly part… 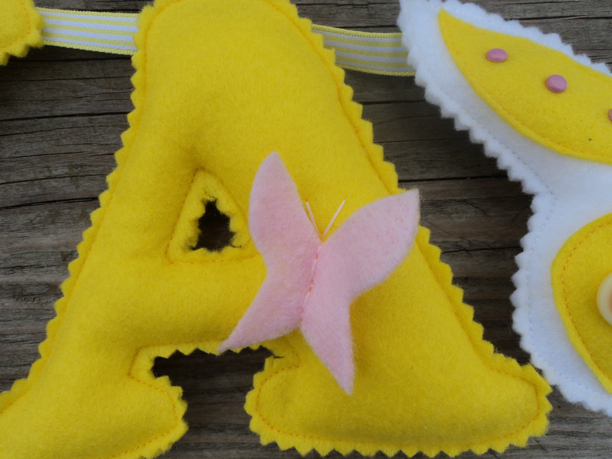 …and a close up of one of the letters with the butterfly attached.

Again, I would like to point out the colours were entirely of my choice — I just have a bit of a yellow thing going on at the moment.

Secondly was another challenge, and as much as I hate to say it, the problem was solved by my husband.

The brief — he likes Woody, Buzz and Army stuff. Woody and Buzz were definitely out, but I guessed that if he liked Woody and Buzz he would also like Toy Story, then my husband stepped in with the "we have some Toy Story army men, why don’t you put them on a banner".

Originally, they were hanging upside down between the letters and looked, well, naff. So we ended up settling on this:

(Apologies for the picture quality, it was dark outside and we were dropping it off pretty much as soon as it was finished).

The two bits either end are parachutes, with army men dangling from them. And his name is in camouflage printed felt.

Again, please try to overlook the awful, awful photograph. I hate using a flash, and hate seeing people’s badly staged photos with the flare from a flash on their business pages, but I had no other way to light this at all.

Onto the boring, explanation stuff. The letters in these are 4½ Inches tall (so quite a bit bigger than my other banners) which makes the length of the banner longer too.

These are priced £12 for up to four letters (£2 for each additional letter) until the 28th February 2011; I will be having a complete price re-structure on the 1st March and these will be considerably more expensive because of the amount of time put into making each one.

If you would like to order one then please, pop me an email on rose@redandrosy.com . I really hope you all like them!