I do love my Name Banners and really enjoy putting them together, but it does get a little disheartening when you see so many other people doing the exact same thing, so over the Christmas break I spent a little time doing some research, having a look online and asking friends, my kids, random people who make enquiries exactly what is missing. no–one really came up with anything that isn’t already out there in some form, and then I remembered when I was pregnant with my eldest son I had a real bee in my bonnet about the type of bedroom he was going to have. And no matter how hard I tried, I couldn’t get anything that had his name on it that went with my theme — it wasn’t that his name is unusual (it’s Jack for goodness sake, the most popular boys name going!) it was that there just wasn’t much about then.

That was six years ago, and having a look around there still isn’t that much around. And now my middle son, Toby, is daft for Dinosaurs. Which is great, but some dinosaur products can verge slightly on scary.

It’s his 3rd birthday this week and he wants dinosaurs. That’s all, nothing else, just dinosaurs. On Friday we were in the playground and he spotted one of the Mum’s with a dinosaur gift bag hanging on her pram, he went on and on about that bag all the way from school to Jo Jingles — he wondered what was in that bag, wasn’t it a pretty dinosaur bag, could he maybe have a dinosaur bag…  he was over the moon when we got to Jo Jingles and he discovered that the bag was, in fact, for him. He did the entire class with the bag at his side, and carried that bag everywhere yesterday — which was why I designed my new Name Banner just for him.

It couldn’t be scary, had to be cute and had to have his name. And this is what I came up with:

I can hand on heart say I haven’t found anything else even similar to this online, and I have done my research! This, and the other ones I will be uploading the next few days, are designed exclusively by me. I may not be able to do anything about people mimicking my star / circle / cupcake / heart Name Banners but this one is totally, 100% me!

I also have a matching Birthday Badge, why not pop over to my Facebook page and check it out and in the meantime, I’m off to get more prep done for my little dinosaur’s birthday party — I’ll be sharing pictures of the hand made party bag contents later in the week along with a few more new products!

Another new Name Banner. This time in a nautical, boaty, sailing theme. 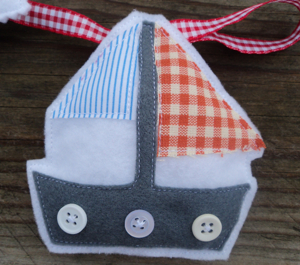 The picture doesn’t really do it justice, the white just doesn’t photograph well (neither does pink when I do the cupcake banners) but you can get the general feeling of it hopefully.

At the moment, these are priced at £12.00 for up to four letters, with each additional letter costing £2. This will only be for January though, I will be reviewing my Name Banner prices at the end of this month to reflect the time it takes to make each one, so this one will be going up slightly.

It’s my middle son’s birthday this week, and as he is going to be three it’s the first birthday he has had where he actually understands whats going on, helped by his big brother telling him every five minutes that on his birthday he gets a cake. Not entirely helpful…

Although it’s his birthday towards the end of the week, my son has the pleasure of sharing his birthday with his Nana (my Mum) and last year, my nephew was born the day after. Last year he shared his birthday party with one of his friends, which was fantastic (and cheap!) but I do feel a little sorry for him having to share his day, so decided to have his party a few days early this year, yesterday to be precise. And I had very strict instructions — it was to be a dinosaur themed party.

To be fair, it was a soft play party in a private soft play so we didn’t really need a theme for that. But he really wanted dinosaur party bags, and that’s where I hit a stumbling block.

I have to be honest, I hate party bags. Which sounds very ungrateful (sorry!), but having three children we have a lot of birthday parties and get a lot of party bag gifts that unfortunately end up in the bin and seem like a terrible waste of parents money. 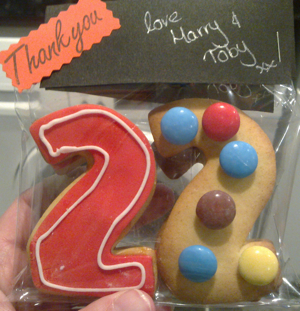 I try to come up with different things to pop in them, for my eldest’s Doctor Who themed party everyone got a Doctor Who book that I picked up in Poundland (and sweets), he had a superhero birthday party for his 5th birthday party so everyone went home with a superhero cape that I made (we had 26 children at that party, I spent an entire week sewing up those capes). I’ve done Play–doh, balloons, sweetie jewellery. My most favourite of all gift, that got the most compliments was the gift my friend and I gave last year (which was sheer genius in my opinion), a joint 2nd birthday party with a Jo Jingles theme — we made biscuits!

So this year I was stumped. I got the actual bags and the Pterosaur gliders to go in the bags before Christmas, and I kept stalling making a start on what else to fill it with. The girls were easy, I made them all Hello Kitty hair clasp holders a few weeks ago. I just couldn’t find what it was I was looking for, I posted on my personal Facebook status, I asked other parents and nothing jumped out (aside from a re-worked idea of something we give out every Christmas…)

Then, on Wednesday night (yup, four days before the party) I found a link to a tutorial to make dinosaur mittens! I showed Toby, and it was agreed. Then I was hit with the most awful bug that rendered me almost useless at the sewing machine, so I didn’t start making the mittens until Saturday mid-morning. I had to make 14 pairs of them, with lots of distractions and ended up getting up at 5.00am on the day of his party just to sew the eyes on (and I swore I would never, ever make a party bag contents ever and told my friends to stop me if I ever suggested it again) — to give this some perspective not only did I have to sew the eyes on, I had also been so ill the days before that I hadn’t been to the shop to buy the party food either!

I got there in the end, and this was what all 14 little boys were given at the party:

There were other sweeties in the bag, but they weren’t dinosaur themed so they weren’t getting in Toby’s photograph! Neither were the hair clasp holders for the nine girls. The Dino poop is a re-worked version of a gift we give almost every Christmas, reindeer poop. It’s just chocolate raisins in a cellophane bag — the kids and I made them on Saturday evening and I finished them off while making numerous dinosaur shaped sandwiches for the party.

They appeared to go down really well, my two youngest wore their mittens today to playgroup and were asked if they were snakes or crocodiles, so they aren’t quite following the dinosaur theme completely but Toby thinks they are dinosaurs (as does his little brother who keeps putting them on and making them roar at things) and that’s good enough for me!

Next up is my youngest, last year for his first birthday we did this: 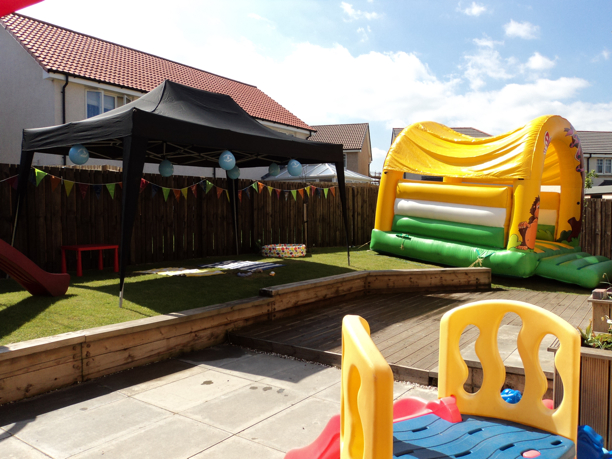 We had what turned out to be the hottest day in May for his birthday party, bouncy castle in the garden, ice-cream in the kitchen and 20 exhausted little people at the end of it. I don’t think we are lucky enough to get that sort of weather two years in a row, so we are having a Jo Jingles party this time round. What to put in those party bags though…

Following on from the Star Name Banners, a few Cupcake Name Banners I have completed over the last few weeks too! 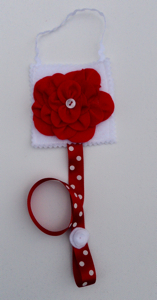 A slightly different take on my usual hair clasp holder, this time a pretty red flower!