I feel as though all I do is apologise for having huge break in the Blog posts, so once again I do apologise!

Firstly and most importantly, it’s only a couple of weeks until my son’s book comes out! At six he is Hodder’s youngest ever author and to say we are very proud of his hard work is an understatement. 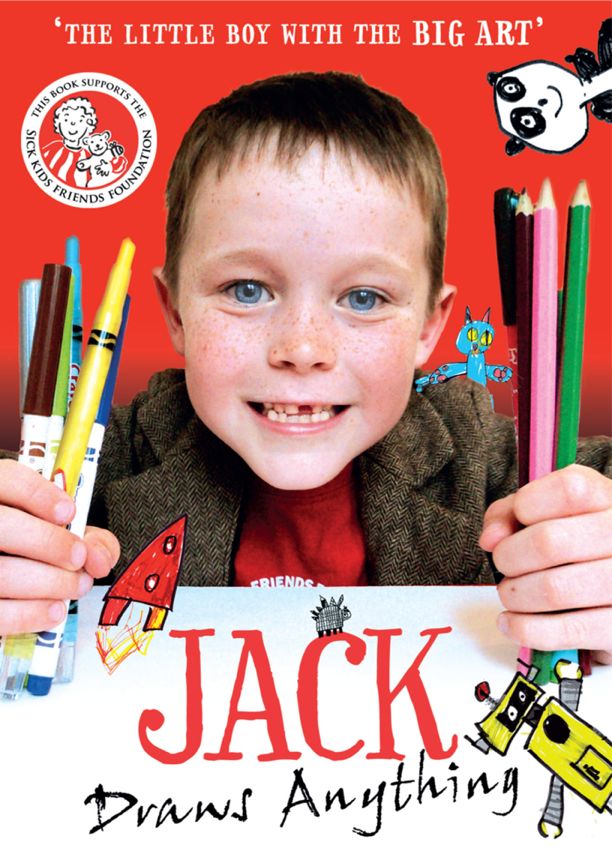 It’s been a roller-coaster few months for us with this project — it’s been very hard work (especially writing the book, that is not easy by any stretch of the imagination). If you click on Jack Draws Anything you can find the two trailers plus the information on where you can buy your copy, should you be so inclined!

Second -  the next few weeks my website should (hopefully) be changing. We did start work on it back in March, then Jack’s project took off and my website requirement was abandoned. Sniff. So it’s been back to the drawing board and trying to get the imagine in my head into my husbands head! (can I just say my husband isn’t one of these people who do web work as a hobby, it’s his full time, bonafide job and he is pretty good at it too. I am his most frustrating client though).

Third — at the start of September I took the unusual step of releasing my Christmas Range. Last year I felt I was early releasing it on September 19th, but there were lots of enquiries this time round and I was clearly not wrong in launching them early as my order book is jam packed already.

Fourth — things are sort of evolving at Red and Rosy. I am still trying to figure out the direction I would like to take the business, already the products I started out with two years ago are not the products I am still making now (with the exception of Name Banners) and I have many different little ideas of what I would like to achieve — it’s just the logistics of achieving this around children and their need’s. My day is pretty packed with their activities and the school, nursery and playgroup drop off’s and pick up’s so attempting to fit my Red and Rosy work around them is proving to be a bigger and bigger challenge as my order book gets fuller. Childcare is an option, but not one I am prepared to go for immediately as I am very aware that in 2½ years time my life will be totally different as they will all be in School. Juggling work and childcare is never easy for anyone!

Finally, I have been working on a lot of new products recently too. I have been selling a lot of cards at different events and I was asked if I could put the design of two of the cards onto canvas and add a name for a gift — I happily obliged and loved the results, pictures of that will be coming soon. I also have some Owl doorstops and Owl cards, as well as some chicken doorstops and of course, the Santa doorstop from last year I forgot to add to my Christmas range.

So, that should be all for the moment! I’m going to schedule some Blog posts for this week with some of my new products and some pictures of the orders I have posted out over the past week. Hope you all have a lovely end to the weekend, tomorrow is a public holiday in my little corner of the woods plus it’s my birthday, so I am planning a lovely day with the three boys picnicking and playing. If that rain stays away!

This was a special request from my little boy Jack, of Jack Draws Anything fame.

His request — a cute hedgehog picture with a bumblebee. Payment would be in cuddles and kisses — so I instantly set to work! 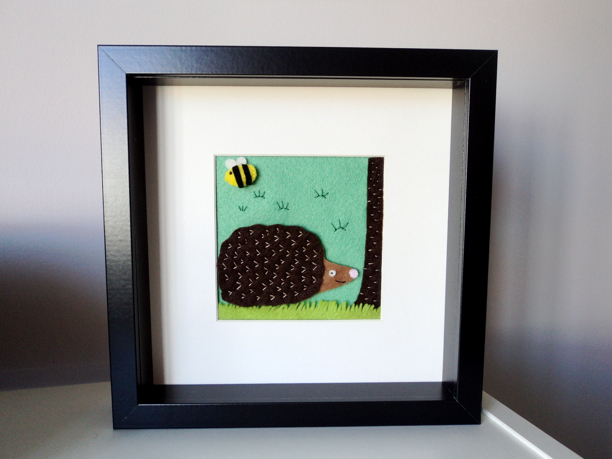 I decided to give the black box frames I have a go, and I do really like it but it does make the overall picture look a lot darker than it actually is.

The main thing is, Jack gave it a big thumbs up and as soon as Daddy is home, it’s going up on his bedroom wall! I’m off to collect payment now. 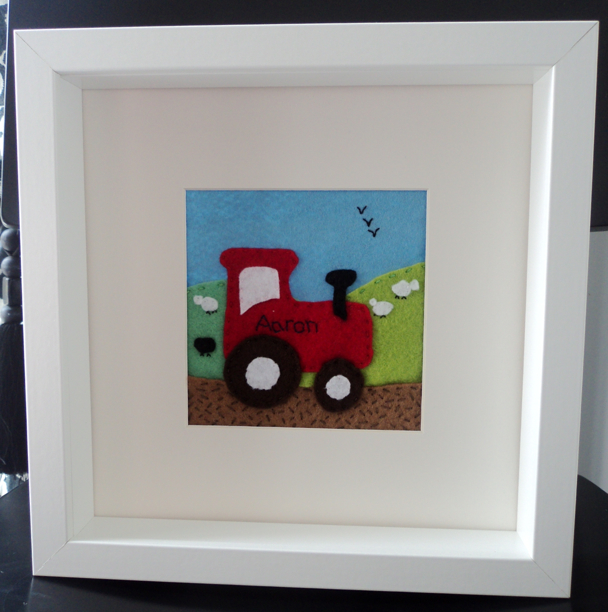 Last week I received a last minute order for a Felt Box Frame — with the request for a tractor and the name Aaron. I really struggled with making a 3D tractor, so decided to do a slightly flatter picture instead with a few layers.

Everything was cut out by hand without the use of templates (so I’m not going to be able to replicate it exactly, and it’s all hand stitched together as well.

Here’s a little close up: 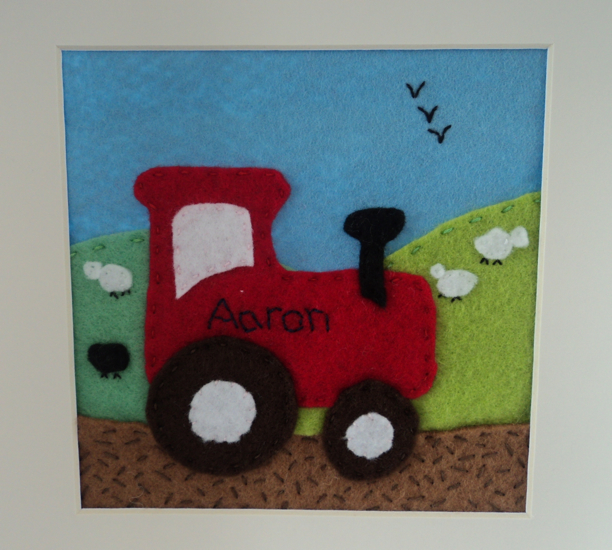 As usual, if you would like to order one of these then please pop me an email to rose@redandrosy.com .

This is one of those posts I should have done in January. Around the 1st / 2nd to be honest. And it’s now July 20th. Just to explain…

Christmas day 2010, my oldest cousin (Ryan) proposed to his girlfriend (Clare). When they shared their good news, I decided I wanted to make them a little pair of Lovebirds. Nothing too complex, complicated or difficult — just a Lovebird each with their name on. And I did. It took no time at all. Then I popped them in the cupboard until I had the chance to pop out and get an engagement card.

In March, I finally purchased one! I wrapped up the Lovebirds, wrote the card and got ready to post them. I even popped them somewhere safe so I wouldn’t forget. And then — I forgot!

In May, while writing my middle cousin’s birthday card, I suddenly remembered that I hadn’t sent the gift, or an Owl Cozy that their younger sister had ordered in, February. So I packaged them up, popped a note to my Aunt in, and put them BACK in the safe place.

I am pretty sure it was the end of June that everyone finally got the package (and severely out of date note!). Ummmm, sorry?

Of course, that was the end of June. This is the 20th July, and while taking some photographs off the camera I discovered the photographs taken in March…

My one and only line of defence is that the package was ready to post on 21st March — that was the day that our house originally went on the market and that Jack’s website was launched. It has sort of been manic since then and during that time we have been in the local, regional and national press, on BBC Breakfast, BBC News 24, BBC Scotland, Russell Howard, Fern, The Hour, STV News, Real Radio, signed a book deal for Hodder’s youngest ever author and wrote the content, been to London, been on holiday, gone through the school term, have Toby start nursery, Noah start playgroup, sold our house, purchased another, have our buyer pull out, pull out of new house, had Noah in hospital…I know I’ve missed stuff but you get the drift, the last few months have in no way been normal!

So — six months late but Congratulations to Ryan and Clare! I am hoping I have a better chance of getting a wedding gift to you in time but please, don’t hold your breath!

Over the next few weeks you should be seeing a few changes to Red and Rosy. Firstly, the website which is frequently overlooked is getting a bit of an overhaul. The colours are exactly what I want, but for a while my web developer and I have been trying to figure out exactly what functionality the site needs. It’s now a whole year since Red and Rosy launched and I think that finally I know what exactly I want from my website — so there will be quite a few changes which in turn will hopefully help me to Blog a bit more — after all if you look at my About Me page what I say I want my site to be about and what it actually does are two entirely different things!

Secondly, I’m going to be giving Folksy a go as well. I have heard lots of positive and negative things about it, but until I give it a go myself then I can’t really say that I am doing all I can to build my little business if I haven’t given the one very obvious place for selling craft items in the UK a go.

Third — I am branching out a bit. I adore my Felt Box Frames and right now I feel that the best way to go is to try and get these into shops. I need to get my brave hat on as I’m not very confident in selling myself to be honest but I do believe that my Felt Box Frames are lovely and I do think that if I had them out there to a wider audience then they would hopefully sell a little better.

Forth and finally — I finally have a 10 year career plan! I’m 34 and never in my life have I even had a one year plan, I fell into office work and worked my way to the top of what I could possibly be (P.A. to Managing Director of a fairly massive company) and to be perfectly honest, it made me miserable and I lived for weekends and holidays. I can hand on heart say now that I have finally found something I want to continue to do for years to come, and while it may not look like much to many people it is a huge step for me. So, hoorah to finally deciding what I want to be when I grow up!

And on a personal level (as if career wasn’t personal enough) things are at best manic, at worst complete and utter chaos at the moment. Our house was on the market, we had a buyer, purchased a new place near the boys school, then on the last day of term our buyer pulled out. It’s taken us two weeks but we have now got back on the horse and the house is going back on the market again next week. Things were clearly not meant to be for us at that point in time, but the right buyer will come along eventually and at that point, the right house will be available for us to buy. I have great faith in the universe working that way. I also have great faith in karma biting the backsides of the not so nice people but that’s an entirely different story!

Things with Jack’s charity fundraising (Jack Draws Anything) have quietened down at the moment, his fan numbers on Facebook are steadily climbing, he is still loving drawing and we are doing all we can to encourage yet not force it on him, and today we approved the first draft of his book. This Friday it will all be finished and what will be the calm before the storm will commence, a couple of months of being nice and normal again before the book launch on October 6th!

But, on with the photographs! I haven’t photographed very many of my makes over the past four weeks as I am a drip and keep forgetting, but I did manage a photo of a couple of Name Banners: 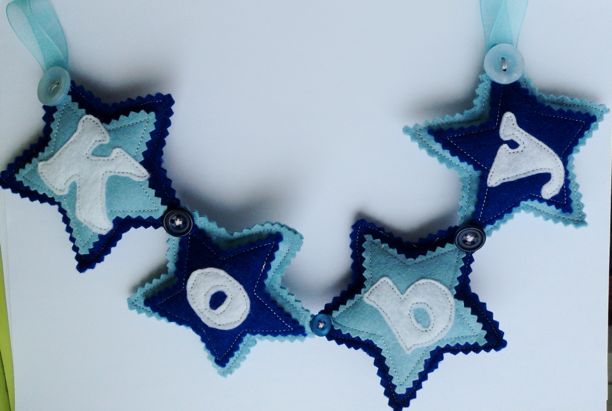 I have made other things, honest!

If you are looking to get hold of me, have a question to ask, would like to place an order — even if you just want to say hi please feel free to get in touch on rose@redandrosy.com . And remember to keep your eyes peeled for all those lovely changes I have in store…